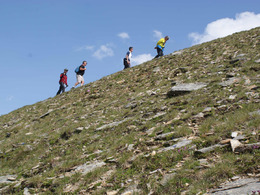 High above the Ziller River, 761 metres in alltitude will need to be surmounted on this steep mountain run until you reach your goal at the Kolmhaus.

Initially running parallel to the Steinerkogl-Circuit, the first 600 metres gained in altitude on this trail are covered along an asphalt road followed by a steep trail. After the Steinerkogl-Circuit branches off in a westerly direction, this mountain run continues along a gravel trail and some narrow paths uphill over another 161 metres in altitude, until the Kolmhaus is reached.

The tours presented here are suggested tours that are provided free of charge. After agreeing to the terms of the disclaimer you receive detailed information such as altitude profiles, route plans, and an option for downloading files etc.

Switch to the English version?